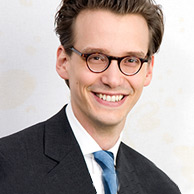 Sebastian Reinsch is a partner of Janke & Reinsch. From 2003 to 2007, Sebastian was an associate in the dispute resolution department of the Frankfurt office of the international law firm Freshfields Bruckhaus Deringer.

From 1994 to 1999 Sebastian studied law at the University of Frankfurt School of Law (First State Examination in 1999). During his studies he was an intern at a U.S. law firm in Columbia, S.C. During his clerkship (Referendariat) at the Higher Regional Court of Frankfurt (Second State Examination in 2001) Sebastian worked in the legal department of an issuer of closed-end real estate funds. Sebastian spent part of his clerkship with a U.S. law firm in New York City.

In 2003 Sebastian received the degree of “Master of Laws” with distinction from the University of Edinburgh, Scotland.

Sebastian is a member of the German-American Lawyers’ Association (DAJV), the German Society for Construction Law e.V. and the German Arbitration Institute (DIS). For the Frankfurt Bar Association he is teaching civil procedure law in legal practice to legal trainees at the Regional Court of Frankfurt am Main.

Sebastian is married to an American attorney, has two daughters and speaks German and English.

This website uses cookies to improve your experience while you navigate through the website. Out of these, the cookies that are categorized as necessary are stored on your browser as they are essential for the working of basic functionalities of the website. We also use third-party cookies that help us analyze and understand how you use this website. These cookies will be stored in your browser only with your consent. You also have the option to opt-out of these cookies. But opting out of some of these cookies may affect your browsing experience.
Necessary immer aktiv
Necessary cookies are absolutely essential for the website to function properly. These cookies ensure basic functionalities and security features of the website, anonymously.
Functional
Functional cookies help to perform certain functionalities like sharing the content of the website on social media platforms, collect feedbacks, and other third-party features.
Performance
Performance cookies are used to understand and analyze the key performance indexes of the website which helps in delivering a better user experience for the visitors.
Analytics
Analytical cookies are used to understand how visitors interact with the website. These cookies help provide information on metrics the number of visitors, bounce rate, traffic source, etc.
Advertisement
Advertisement cookies are used to provide visitors with relevant ads and marketing campaigns. These cookies track visitors across websites and collect information to provide customized ads.
Others
Other uncategorized cookies are those that are being analyzed and have not been classified into a category as yet.
SPEICHERN & AKZEPTIEREN